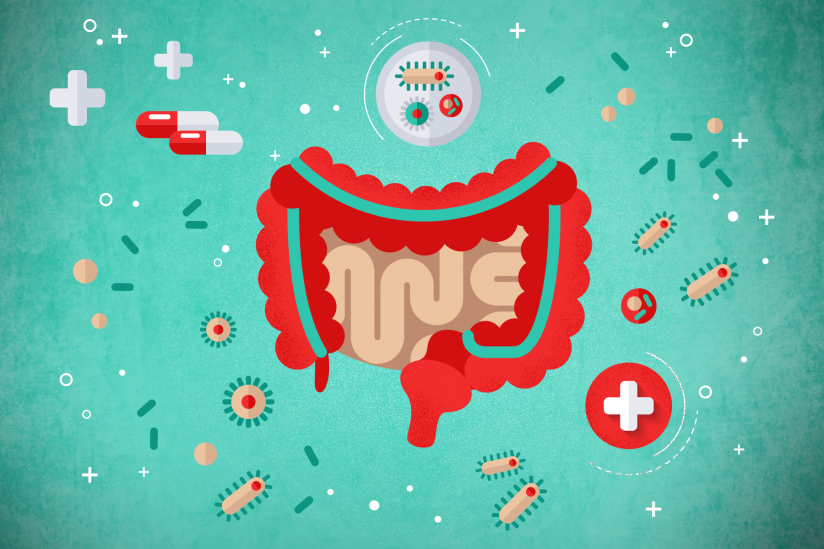 The trillions of microorganisms in your gastrointestinal system are unique to each person, and taking care of them will greatly improve your health, USC researchers say. (Illustration/iStock)

Nowadays, going with your gut has a whole new meaning. Whole Foods Market and other stores have entire aisles devoted to probiotic supplements. Kombucha, a fermented tea drink, is on tap at restaurants. Folks are bottling their own kimchi and sauerkraut.

Probiotics — live bacteria and yeasts — haven’t been studied enough to say whether they ward off disease, autoimmune issues or allergies. But probiotic popularity is rooted in something real: Gut health is heavily connected to overall health.

The human gut contains trillions of microorganisms, and they do everything from helping us metabolize our food to fighting disease, aiding in our long-term survival, according to Caroline Hwang, a gastroenterologist at the Keck School of Medicine of USC.

Each person’s gut is as unique as a fingerprint, she said, and that can make it hard to isolate which bacteria are good and which are bad. There is a consensus on some, though, such as lactobacillus = good and E. coli = bad.

Because circumstances are so individualistic, several people could take the same probiotic and maybe only one could see a benefit.

To try to get closer to figuring out a healthy microbiome (the vast array of microbes living within the body), researchers are looking at the microbiome in people who are sick and comparing it to that in healthy individuals. They’re stirring up some interesting findings.

Blame your gut on your gut

Turns out that folks who have a hard time shedding pounds could partially blame their gut. Researchers found that if they took microbiome bacteria from obese subjects and transplanted it into healthy subjects, the healthy people started to gain weight, Hwang said.

Researchers in USC School of Pharmacy researcher Daryl Davies’ Alcohol and Brain Research Laboratory are building on that work, looking to see if alcoholics have different gut bacteria than non-drinkers. If it’s the case that their guts are making it harder for them to stop drinking, perhaps bacteria from a non-drinker could help curb their drinking, Davies said.

Depression and autism — and your gut

Then there’s research that shows that your gut can be tied to your mental health. Researchers in Norway, looking at a small group, found that certain bacteria could be connected to depression in patients. Another study found a certain bacteria, bifidobacterium, as effective as the antidepressant Lexapro.

Even autism could be tied to gut bacteria, researchers say. About three-fourths of people with autism have some type of gastrointestinal issue, and studies show their microbiomes differ significantly from non-autistic control groups, according to published research.

“The baby swallows a lot of fluids going through the birth canal and that’s when they populate their gut,” Hwang said.

Babies who are born naturally have lower rates of allergies compared to babies delivered by cesarean section, she said. Also, C-sections can put a baby’s healthy gut at risk early on, as it’s common for mothers to be given antibiotics during the procedure.

There are studies that show stressed out mothers can pass their anxiety onto their babies through the birth canal. If stressed, they tend to pass on less of the healthy bacteria, such as lactobacillus, which is important in calming anxiety.

Breast-feeding can influence a person’s autoimmunity as well. Breast-fed babies have lower rates of autoimmune diseases such as Crohn’s disease or colitis, Hwang said.

One big culprit could be the sterile world we live in, she said. There are data that show that kids who grow up with pets have fewer allergies and autoimmune diseases. Working and playing outside, especially while young, could be protective. For example, the Amish, who grow up in close proximity to livestock, tend to have much lower rates of autoimmune disorders. In the industrialized world, it’s common to spend much of the day indoors, both as children and as adults, which scientists believe could end up causing allergies to otherwise common things, the Times reports.

Is it possible to retrain your microbiome? To an extent, yes.

The two big things to pay attention to are diet and antibiotics, Hwang said. A diet rich in whole foods, fruits and vegetables will help good bacteria prosper. Processed foods, which can have detergents or emulsifiers, could harm it. There’s evidence exercise helps, too.

Antibiotics should only be used when absolutely necessary. Since many used are broad-spectrum, meaning that they can help with several types of infection and aren’t localized, they can wipe out a lot of healthy bacteria.

“The data are actually showing that antibiotics can change your microbiome for years,” she said.

A transplant down there

A fecal transplant — yes, a poop transplant — is proving to be an important tool fighting the new wave of antimicrobial resistant bacteria or “superbugs.” It’s also a great example of using healthy gut bacteria to fight harmful gut bacteria.

The procedure cures upwards of 90 percent of patients with C. diff, a bacterial infection that can be antibiotic-resistant, Hwang said. C. diff can be caused by taking antibiotics, after killing off disease-fighting bacteria — making it a perfect breeding ground for infection.

When it comes to probiotics, they’re still an experiment. Rachel Reyes, a USC doctoral candidate in Davies’ lab, takes probiotics herself. She thinks while it’s hard to say whether probiotics will have any effect on a healthy microbiome, she thinks it’s possible probiotics could help people who recently took antibiotics.

It’s also possible that down the line, personalized probiotics, which isolate for specific bacteria, could yield more conclusive results.

With bacteria so different from person to person, Reyes thinks there might be a more effective tool on the horizon: saving your poop.

If patients saved and stored fecal samples from when they were healthy, she said, they could be transplanted later on to help fight disease.

Recent Posts
(Español)
Get In Touch